Finnish planes land on a US carrier? Not quite. It's all show pony, no real "go"....

Thanks to Iron V for the link! 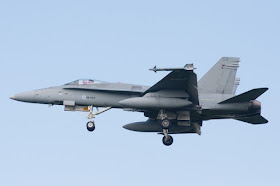 
This Plane Just Landed on a U.S. Navy Aircraft Carrier. The Catch: It’s Not American

On March 17, 2017 in the Atlantic, a fighter jet landed onto the Nimitz-class aircraft carrier USS Abraham Lincoln. The only difference this time was that the pilot was Finnish, not American.

Capt. Juha “Stallion” Jarvinen’s landing was the first landing on an aircraft carrier by a Finnish air force pilot in history, according to the U.S. Navy. Jarvinen was flying a U.S. Marine F/A-18C Hornet with Marine Fighter Attack Training Squadron 101 as part of a pilot exchange program — also a first between the U.S. Marines and the Finnish air force.

Yahoo's title, not used here, is pure click bait.  You see an airplane, in this case an F/A-18C with a Finnish roundel on it and the assumption is that a Finnish fighter did the deed.

It's simply a Finnish exchange pilot flying a US MARINE CORPS fighter that did the deed.

When viewed thru that lens this is nothing new.

So why are they trumpeting this to unknowing members of the mainstream news media?

Because most of those bastards don't know and will simply repeat whatever they're told if the person telling them this shit wears stars.

The amount of utter hatred that I have for the caviar class of journalists increases everyday.  Investigative reporting is dead.  They're simply mouth pieces for people with agendas.

That's why watching the news coverage out of DC is so frustrating.  No one has even the basic knowledge to ask the simplest of questions.

This shit happens every damn day.  The difference?  We usually don't put foreign insignia on the planes that the exchange pilots fly.
Solomon at 3/25/2018 12:00:00 AM
Share