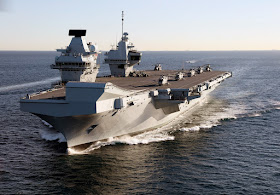 The peer had been repeatedly assured by defence ministers that the Type 31s would be delivered on time.

Lord West told The Sun: “Just 15 major service ships will put us into the second tier of the world’s navies
“Fifteen surface ships means only five on task, as a third will be in maintenance and a third will be training.

“For a great nation like ours, just five frigates on task is a national embarrassment and disgrace.”

The revelation will hike tensions further between the MoD and No10 ahead of this summer’s defence and security review, which forces chiefs already plan to use it to plea for more money.

Just 10 days ago at the Sun’s Millies awards, PM Boris Johnson boasted that the number of frigates in increasing.

Last Autumn, the MoD faced international embarrassment when it was unable to protect British flagged merchant ships from being hijacked by Iran in the Straits of Hormuz.

You think what I highlighted above isn't bad enough?  Then check out this tidbit from the same article.


In comparison, France has 22 frigates and destroyers, and even Italy has 17.

At the same time, the ageing generation of Type 23 frigates are still to be paid off from 2023, leaving the major shortfall.

The number of frigates is set to fall from 13 to nine by 2027, while the number of Type 45 destroyers remains at six.

Gonna be hard for the UK to keep up global commitments with such a small naval force.  By necessity they're gonna have to rely more on the Royal Air Force and maybe even the British Army to act as a deterrent.

Question.  Can the Royal Navy even float a credible carrier task force with such a small force?  If they can will that strip them of independent ship operations elsewhere?

It might be worthy of a giggle if our own Navy/Marine Corps wasn't headed down the same road.

With the exception of China (at least right now...still waiting to see how the Coronavirus affects them), everyone seems to be following the lead of the Germans.